For the record, it was very hard to put my older, fatter mug shots on display for my April Fool's gag. Avoiding mirrors, glass reflections and cameras was a deeply-ingrained behavior pattern in my binge eating days. In case you missed it, I'll paste the fake progression at the end of this update post. I should keep it in front of ME as it's a good reminder of what's at stake if I ever slide back into binge eating.

Note: My last binge was in August 2011, so I've now gone the longest without bingeing since I first began to do so at age 15.

So, my new strip for April appears at the right--do you see what I think I see? I think my throat is losing a little more fat. What used to be a chin-to-chest roll, and what was still a thick fold last month, is oh-so-slowly becoming a thinner fold.

I'll admit my desire to practice maintenance all this month is wavering just a bit. My next-to-last winter friends are leaving for Canada tomorrow and my still-here friends won't head for Wisconsin until late April so I COULD sneak 2 or 3 weeks of ADF (alternate day fasting, which in my case is usually 3 days per week) into April without being too obsessed about it. In fact, if I have an obsession at the moment it's the fact that my Wisconsin friends are about to head north again and I'll have only the phone with which to stay in touch for the next 6 months.

A new variable entering my health regimen is that I've reached a level of health & fitness in which it's safe to begin what younger folks would recognize as exercise. Daily tasks done more manually are now a little too easy to build strength.

I forgot to mention my waist/hip measurements. They were exactly the same as on
March 1st, which is just fine since I've been practicing maintenance. It's good news, because shopping wisely and then ignoring timing, portions and mixes of foods worked perfectly and I'm showing NO tendency toward weight rebound. YEA!!!

I've pasted 2 April 1st mug shots below because I want to show you something. 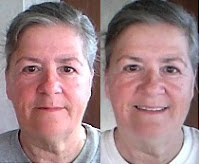 Did you ever wonder why I never smile in my mug shots or profile pics? I am a person who smiles a lot, because it's who I am, but all the extra fat on my face contorted my smile so I looked as if I was in pain rather than happy. Now, finally, my true smile is just starting to come back.

Beginning next month I will use mug shots of me smiling so I can track the return of my smile. THAT will be a fun progression!

Okay, here's a reversed "April Fool" weight progression, from March 1st 2012 (left) to the summer of 2010; the "fat" end was not actually the peak of weight-gain but I didn't find a photo from early 2011, which is when I stopped gaining--let's say 10+pounds heavier?

Here's the thing: I FEEL as much better as I look. And that's what matters.
Posted by Unknown at 12:39 PM

Email ThisBlogThis!Share to TwitterShare to FacebookShare to Pinterest
Labels: weight-loss