Training for Maintenance: It's Not Easy

This is the 3rd post in a series about taking a break from active fasting/dieting and just practicing what my daily life would be if food were not the central issue in my life. I still lack confidence about maintaining a good weight because of my history of yo-yo dieting and relapses of binge eating. The kick-off post of this series can be found here and part 2 here.


While I've been doing well, I suspect maintenance won't be easy for me because I seem hard-wired to obsess about food whether the focus is buying/eating junk or buying/eating healthy or reading non-stop about eating. There aren't that many ex-bingers walking around the US looking lean so I will count my whole-foods journey as a success if I manage to reach/stay at a desirable weight even if I have to struggle with obsession forever.

After two weeks of concerted effort, I MAY have managed not to think too much about food yesterday (yes, I see the irony--it's a joke, okay?)  As far as I know, I didn't plan my eating schedule and I didn't build my main meal around a predetermined ratio of macronutrients. I didn't measure ingredients or count calories. I just pretended it was easy to eat whole foods for fuel and go about my business.

Sure, go ahead and laugh but many of those in the "paleo" or  ancestral eating community DO think hard (and communicate almost endlessly) about eating schedules and macronutrient ratios.  But I don't think naturally lean people do that--I've known some and they've always given me bored looks when I talked about trying to lose weight. Some of those friends ate a lot of junk and ate whenever they wanted to without ever getting into trouble. Damn them.

I've also had some lean friends who knew they needed to be careful in what they ate, and were, but managed to make it look easy. They didn't seem to build their lives around what/when they ate. They tried to shop sensibly and eat sensibly and that was about all the thinking they did about food. Frankly, they are my desired role models although I also want to build my nutrition around whole foods which they didn't/don't worry about.

The rest of my friends have either been failed dieters who were out of control or active dieters who were completely obsessed with their efforts because that's what it took for them to continue dieting. I'm assuming this sounds very familiar--I've been in both groups numerous times and I don't recommend either as a long term role.

For my second week of "training" for maintenance I had 2 rules:


Yesterday was fairly typical of all the days in the past week. I didn't give food much thought while I sipped my morning mugs of coffee (adulterated as usual with heavy cream and honey) other than to marvel at feeling strong and calm. Right around noon I noticed the first stirrings of true (stomach/gut) hunger and opened the fridge to see what looked good.


I grabbed the package of bacon and saw that the grandkid left me 2 pieces; I also grabbed the egg carton but there were only 3 left so I decided to leave those for him (or me on another day.) I slow-fried the bacon on med-low heat and, while it cooked, peeled and ate a grapefruit. Note: I always cut bacon strips in half for even cooking in the hottest parts of the skillet--plus 4 little pieces somehow seems like more than 2 longer strips.

I removed the bacon when browned and added 4 beef patties (from the package of grassfed ground beef I took out of the freezer yesterday.) I have a small package of little-neck clams in the freezer. I heard them calling, but only faintly, so I opened a can of sardines (in olive oil), sprinkled them with powdered mustard AND a spoonful of the liquid bacon fat from the skillet and sat down to enjoy. Big thumb's up for the bacon/sardines combo.


After happily eating the sardines, I flipped the burgers and chopped up 2 small yellow summer squashes. Actually, the squash was my second choice--I'd lost track of some fresh broccoli and when I grabbed it I realized it was no longer "fresh." After taking out the cooked burgers, I dumped the squash into the skillet for gentle cooking/browning. Two of the burgers went into the fridge and the other 2 were my main meal along with the squash. Yes, I know I ate HALF A POUND of beef plus 2 pieces of bacon. Plus the 3 or so cups of squash. Given my history of spectacular binge eating, why would you consider that noteworthy? I skipped salad, after all, due to lack of desire. For the record, this meal made me feel happily full but not uncomfortably stuffed. For the record. 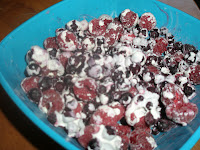 About an hour after eating that delicious meal I decided my sweet tooth needed a fix. I took a handful each of (frozen, organic) wild blueberries and red raspberries--okay, they were LARGE, carefully balanced, handfuls. I was in the process of making yogurt but didn't have any in the fridge, so I poured on a little heavy cream. I didn't measure the cream but there was none sitting in the bottom of the bowl and only some of the fruit was coated--3 tablespoons?


Anyhow, I credit my recent frozen-fruit-with-yogurt-or-cream romance with totally distracting my lust for ice cream. On my last shopping trip I cheerfully walked past the ice cream section of the store to find the frozen organic fruit section and it didn't feel like a sacrifice.

For me, eating whole foods--only when I'm hungry--will be a key piece. Stocking my kitchen with whole foods and not worrying constantly about food rotations and ratios--and not boring the world with my epic struggles--may be as close as I can come to experiencing maintenance as an "easy" process. I think I will gain some security if I continue my recent practice of monthly status checks, since I can make small, routine adjustments if/as needed yet monthly frequency will not feed day-to-day obsession in the way NOT checking would.

Part of me now feels energized and confident and ready to tackle the final phase of fat loss, but the rest of me feels the need to continue this rest phase. Right now, I'm basically obsessed about not being obsessed but I seem just a little closer to being ready for maintenance. This coming week may be my last one of practicing for maintenance or I may extend the maneuver for another week. Maybe.