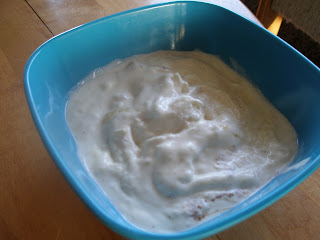 I've been making home-made full-fat yogurt for a few months. Mine is actually extra-fat, because I use one part organic heavy cream to 3 parts organic whole milk. I make 2-cup batches, which I usually eat in 3 portions. I keep it in the refrigerator, of course, and I usually slice a banana or other fruit into the yogurt and sprinkle with cinnamon.

This recipe uses the exact same foods to produce a dessert that's just as healthy but tastes sinfully good.

I frequently have several bananas reach "perfect" at the same time--freckles, wonderful aroma, etc., but I can't eat 3 or 4 bananas in one day. I throw extras into the freezer peels and all.

Whether it's home-made or store-bought, once you use some of the yogurt (clear liquid) whey should seep into the empty space. That's good, because the yogurt becomes even thicker and the whey can be stirred back in but can also be used separately. That's what we'll do. From my yogurt, there's between 1 and 2 tbsp whey for each serving of yogurt remaining in the dish.

Make the Pudding! (at the beginning of meal preparation)

1. Peel and slice/chunk the banana. It should still be frozen but softened enough to slice easily.
2. Put the banana chunks, whey and cinnamon into your blender/food processor/bowl and immersion blender.
3. Pulse just enough to turn the banana and whey into a thick paste.
4. Gently stir the banana/whey/cinnamon paste into the chilled yogurt; I like to barely mix it in rather than thoroughly whip it.
5. Put the pudding in the freezer and fix/eat your meal.
6A. When you're ready for dessert, the pudding will be very cold but not really frozen. Mine made a thick creamy pudding with rich banana flavor.
6B. There's a short-cut method too. Just slice/dice the frozen banana into chilled yogurt and sprinkle with cinnamon. The frozen/cool combination is very interesting and the flavors are a little more separate.
6C. If you make pudding and want it truly frozen, you'd need to make it farther ahead. I don't know if it would have  creamy texture, it might be more of the icy frozen yogurt texture. If I try it that way, I'll come back and update this post.

Just remember, this is not a "paleo-friendly" dessert. This is a healthy probiotic food that just happens to taste like a dessert. Enjoy!